< Back to the news and events

Over 6500 competitors have registered to take part in 9 races during the weekends’ 30th anniversary of the Audencia Triathlon of La Baule (France) which is a highlight in the world of amateur sports event.

MCPP have nearly 40 participants committed to the Tri Relais competition, MCPP wanted to contribute to the Audencia Business School objective of having the lowest environmental footprint for the event to-date. Becoming official supplier of the event, MCPP are providing 30,000 gobelets which are 100% biodegradable when composted which are a substitute for the plastic cups previously used.

For most of us, a paper cup is perceived as harmless to the environment since the cardboard deteriorates fairly quickly in contact with the earth and weathering conditions. However, this is not the case; To be waterproof the cardboard must be film-coated. Previously this film would have been polyethylene (PE), which is the same material used to produce carrier bags, the European Union are attempting to  replace polyethylene (PE) with more environmental friendly materials, such as BIOPBS™.

FROM NATURAL ORIGIN AND BIODEGRADABLE

The BioPBS™ used as a film-coating is based on polybutylene succinate, a material extracted from natural raw materials.
The perfect compatibility of BioPBS™ with cellulose provides a strong adhesion to cardboard. Offering higher thermal resistance when compared to PLA (another material from natural origin) it may be used for hot drinks and food applications,.
A key asset of the BioPBS™ is that it degrades fairly quickly in soil or in a composter, either domestically or industrially. 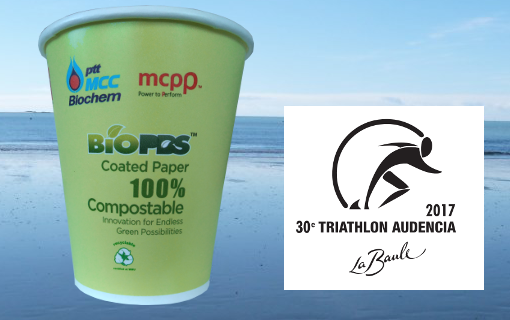